With today being President’s Day, I thought I’d commemorate the occasion by putting a baseball spin onto things, and covering an abbreviated history of United States Presidents who have thrown out a first pitch at a Major League Baseball game. 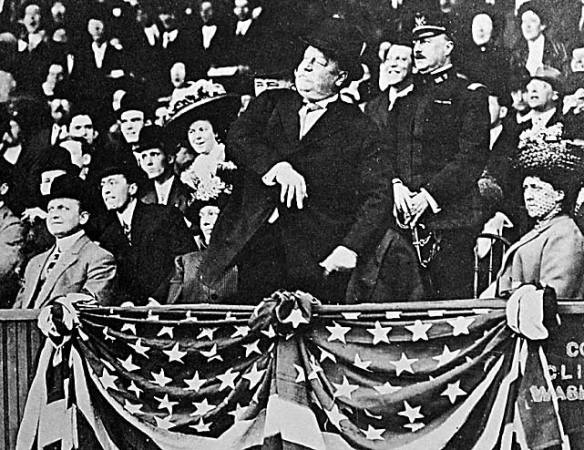 The inaugural presidential first pitch came back on April 14, 1910, when William Howard Taft (seen above) threw out the first pitch to Walter Johnson, on Opening Day for the Washington Senators, at National Park. Taft did so from his seat in the stands, not the pitchers mound, as would be the tradition for many years to follow.

Woodrow Wilson became the first president to throw out the first pitch of a World Series game, when he did so on October 9, 1915. Calvin Coolidge, Herbert Hoover, Franklin Roosevelt, Dwight Eisenhower, Jimmy Carter and George W. Bush are the only other presidents to have 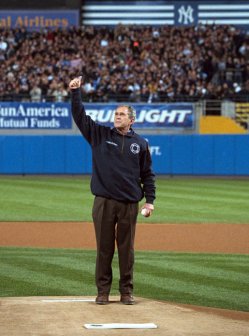 thrown out a World Series first pitch since Wilson, however, Bush’s first pitch is probably the most memorable and meaningful pitch of them all; perhaps the most significant pitch in the 100 year tradition.

Coming a mere 48 days after the September 11th attacks, President George W. Bush threw out the first pitch before game 3 of the 2001 World Series, in front of a sold out Yankee Stadium. Bush gave a quick thumbs-up to the crowd, as if to say “we’ll get through this, together”, before throwing a strike down the center of the plate. The Yankees would win the game, however, they would go on to lose the World Series to the D-back’s in game 7.

The most recent presidential first pitch came from current President Barack Obama at National’s Park, on Opening day in 2010. Having been elected in November to a second term, odds are that Obama will throw out another first pitch; the only question being when and where. If Obama can schedule out a World Series first pitch, he will join Franklin Roosevelt as the only other president to have ever thrown out an Opening Day, All-Star game and World Series first pitch.

If I were Obama, I’d figure out a way to make it happen.