After failing to hit a home run in his first 17 games of the season, Giancarlo Stanton has started to heat up lately, as he’s blasted (and I do mean blasted) three home runs in his past two games. But while this is certainly great for both Stanton and the Marlins, you have to question whether 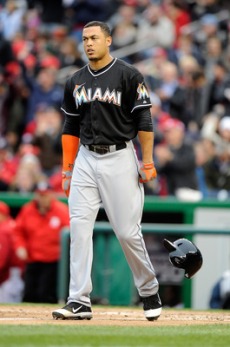 it will actually play out over the remainder of the season.

If Stanton continues to tear it up at the plate, it’s likely he’ll find himself getting walked more and more, as there’s really no one in the Marlins’ lineup that can hurt a team as much as Stanton.

Taking a look at Stanton’s stats so far this season, the additional walks are already taking place. Having only been walked 46 times last year, in which he hit 37 homers, Stanton is on pace to reach base via walk 78 times; that’s going off him playing 123 games like last year.

Assuming Stanton stays healthy for most of the season, resulting in more games played, it’s not all that hard to imagine him getting walked over 100 times. If he still continues to rake, perhaps even more than that.

So where does that leave Giancarlo Stanton?

The absolute best thing that can happen to Stanton is for him to get traded. A big blockbuster trade would be beneficial to both Stanton, helping him to somewhat salvage what’s sure to be a non-Stanton season, as well as the Marlins, gaining them some key pieces that will help them win more games down the road.

Stanton alone, while he’s an incredibly talented player, isn’t going to win the Marlins games. Maybe a few, here and there, but not enough to affect the outcome of a season. They need more than just one guy.

Therefore, sitting just four home runs shy of the 100th for his career, while Giancarlo Stanton will undoubtedly reach the milestone sometime within the next week or two, I see it being the last milestone he’ll achieve in a Marlins uniform.