Josh Hader was drafted by the Orioles in the 19th round of the 2012 draft, after going 10-0 with a 0.39 ERA and 125 strikeouts his senior year at Old Mill High School in Maryland. 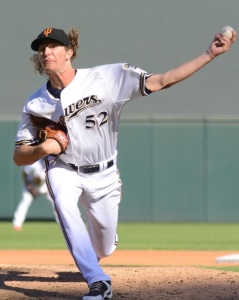 Since the draft, Hader has switched organizations twice, going to the Astros in 2013 and being traded once again to the Brewers this past season. However, all the transitioning has seemingly had little impact on Hader and his ability to post stellar stats. In 2015 alone, Hader recorded a 3.03 ERA with 119 strikeouts over 104 innings pitched and held batters to a mere .224 batting average.

Due to his consistently good numbers, Hader has seen a steady climb in the overall prospect rankings, winding up all the way at number 61 in all of baseball heading into this season.

With a fastball in the mid-to-upper nineties, an above average slider and a work in progress changeup, Hader could be seeing time at the major league level in the very near future if everything continues to go as planned.

Josh Hader — top prospect in the Brewers’ organization — took the time recently to answer some of my questions:

I started playing baseball at the age of 3. My father got me interested in the game, and I fell in love with it.

I loved Randy Johnson — watching him on the mound and attacking hitters.

3.) You were drafted by the Orioles in the 12th round of the 2012 draft. What was that process like for you? Where were you when you first found out? Initial thoughts?

It was a wild experience — a lot of emotion going through the process. I was actually headed to Camden Yards for the high school senior All-Star ceremony, and I got a call saying I had been chosen by the Orioles in the 19th round. Everything kind of stopped. I definitely felt like my truck was floating in the air. The next day I played at Camden Yards for the All-Star game and was able to throw in front of Buck [Showalter].

4.) When you were in high school, your fastball sat in the upper 80’s, but after being drafted you saw a jump to the mid 90’s. What do you attribute to such a rapid burst in your overall velocity?

That’s one of the most asked questions I get. All I can think of is being on a set program long tossing, keeping my upper body loose and throwing everyday. Having me grow into my body also helped. I started to gain more weight and was on a set weight program which helped me build leg strength.

5.) Back in 2013, you were traded from the Orioles to the Astros organization, and in 2015 you were sent to the Brewers. Being traded midseason each time, what overall impact did the swap have on your mentality and effectiveness for the remainder of each particular season?

Being traded the first time, it was different, but very easy for me because the guys at the time from the Astros were very welcoming and helped me transition easier. We were a winning team and had one thing in mind, and that was to win games. Being traded the second time with guys I knew helped out because you at least know some guys. If anything, being traded midseason helped, because you get the couple of extra days rest, so it gets your arm a little more amp.

Going to the AFL helped me out a lot, being able to get some extra time to work on my changeup and slider. The slider — I changed the grip midseason, so it was a whole new feel. In the AFL the slider became one of the bigger pitches for me. Being able to pitch against the best of the best there also helped me because I knew 1-9, everyone could do damage. It helped me be able to work hitters and made me throw offspeeds behind in the count, and made me keep the hitters off balance.

7.) When you began your career, you were used solely as a relief pitcher, but were switched to a full time starter in 2013 before being used as both a starter and reliever again over each of the past two seasons. How do you go about making an effective transition between starting and relieving throughout the season?

The biggest thing is the warm up before the game as a starter you have a routine you go through and you have time to get ready, but as a reliever you don’t have that luxury of the pre game warm up. No matter the role the job still stays the same, doesn’t matter if it’s the 1st or last inning, you have to get hitters out and keep the game in our team’s favor.

Changing where I stood on the mound and my slider grip was the best thing for me in 2015. It made all of my pitches become much better and easier for me to command. My goal for 2016 is to be in the big leagues and to keep the same momentum going into this year.

Spaghetti would have to my favorite food hands down. [For TV show], any hunting show on the outdoor channel.

To never give up on the game; to always work hard, because you never know who is watching you play. Never take the game for granted because it goes by so fast. Always have fun playing. It’s a kid’s game no matter how old you get.

Big thanks to Josh Hader for taking the time to answer my questions.