When the plan to visit the Tennessee Smokies (Double-A affiliate of the Cubs) was originally being put into place back in early April, I was really looking forward to seeing what was sure to be an extremely talented team. With names such as Kris Bryant, Pierce Johnson, Jorge Soler, C.J. Edwards, and many other top prospects and above average players, I just knew that this game was going to be an exciting one.

That was, however, until everything went wrong.

Pierce Johnson, Jorge Soler, and C.J. Edwards all hit the disable list earlier in the year, keeping them from being at the game, and my optimism that Kris Bryant would still be a part of the team after blasting over 20 home runs in the first half of the season fell just short, as he was called up to Triple-A mere days before my arrival. And thus, Bryant joined the long list of great players who I wouldn’t have a chance of getting an autograph from.

But despite all the bad luck, my dad, grandpa and I made our way out to Kodak, Tennessee yesterday afternoon to take in the early two p.m. game against the Chattanooga Lookouts (Dodgers’ Double-A affiliate, which also didn’t have too many good players). After a quick stop for lunch, we made our way over to the Smokies’ ballpark, bought tickets, and headed inside the stadium: 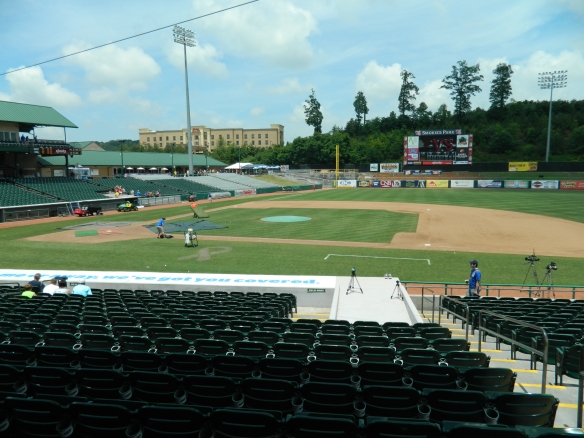 All I could think about upon first glance of the field was that Kris Bryant had been playing on that very surface not all that long ago  (a number of great players have played there in recent years, including Starlin Castro, Javier Baez, Chris Archer, etc.) but I tried not to dwell on it for too long. To help get my mind off of Bryant’s absence, I swung by the gift shop for a few minutes, where I browsed the wide variety of items before heading down to field level (in the extremely hot sun) with the hopes of snagging a few autographs: 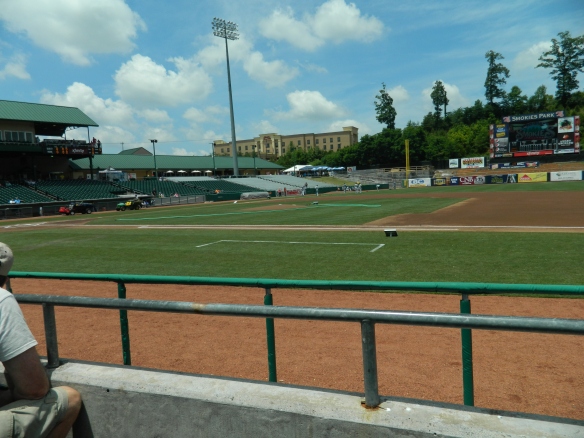 As I stated earlier, the Smokies aren’t all that fantastic of a team at the moment, with so many star players hurt, but I still wanted an auto from Dustin Geiger, Christian Villanueva, Corey Black, and former big league pitcher, Storm Davis. While I was successful in getting Geiger to sign my ticket, I didn’t snag an auto from Villanueva, and never actually spotted Davis or Black.

But regardless of the subpar pregame autographing, the game itself was much more exciting. Though not ranked very highly, the one player that really stood out to me was the Lookouts’ Darnell Sweeney:

Sweeney isn’t ever going to hit for much power according to a lot of people, but he was impressive on the day, picking up a couple of hits, making some great defensive plays, and showing off his speed (he stole nearly 50 bases last season). And therefore, Sweeney is a player I’ll be keeping an eye on.

As far as the game goes, heading into the day, both starting pitchers had an ERA above six for the season, which would lead you to believe it was likely going to be a high scoring game. But things started out rather slowly, with neither team scoring through five innings played, and the most entertaining moment being the traditional chicken run that takes place every home game: 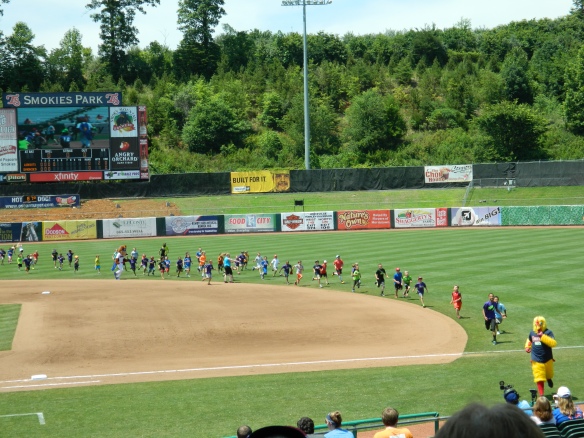 (Everyone loves a good chicken run.)

However, as the temperature began to heat up, reaching a high of 91 degrees, the game quickly heated up as well. With two out and a man on in the sixth, Christian Villanueva blasted a home run out onto the outfield grass berm, putting the Smokies up 2-0. Then, in the very next inning, Dustin Geiger copied Villanueva with a two-run dinger of his own . . . . :

Upon the final out, I went back down around the dugout to try once more for an autograph, but my main target — the only other key player I had seen before the game — ,Villanueva, bolted down the dugout tunnel. Thankfully, although I never saw him prior to the first pitch, Corey Black popped out of the dugout and began to sign autos for the many people who wanted him. I was the last one he signed for, and was able to leave the game with two autographs.

Though two autographs isn’t very many, the time spent out at the game more than made up for it. Any time I can combine baseball, traveling and time spent with family, it’s sure to be a fantastic time all around.